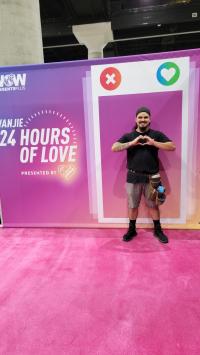 Step and Repeat LA crew member, Robert, in front of a freshly-installed backdrop

(EMAILWIRE.COM, May 13, 2022 ) DOWNTOWN, LA  RuPauls DragCon is an event that celebrates drag culture, queer culture, and all things self-expression, and is held annually in Los Angeles, NYC, and the UK. Each year the conventions, which were all inspired by RuPauls runaway hit show, ‘RuPauls Drag Race’, attract the likes of drag queens, fans, and curious spectators who are interested in learning more about this fantastically colorful culture.

With the 2020 pandemic wiping out all major events across the globe, 2022 marks the epic comeback for the Los Angeles-based event, and World of Wonder  the production company behind all of the conventions worldwide  is prepping for quite a show!

Step and Repeat LA was commissioned by World of Wonder (WOW) to create a series of banners for this years event, which will be held at the Los Angeles Convention Center in Downtown. The banners were produced using a high-quality matte-finished fabric, which absorbs all light and guarantees a flawless photo every time!

The subjects of the full-color backdrops featured a variety of WOW shows, including ‘Tartan Around with Lawrence Chaney’, ‘Gay Sex Ed’, and ‘Why R Humans’.

Step and Repeat LA also provided all signage, props, and even a crew of strapping young installers to set up an exhibitor booth belonging to none other than Kahmora Hall, a former contestant on ‘RuPaul’s Drag Race Season 13’!

For Ms. Hall’s booth, Step and Repeat LA created a customized backdrop and floor print, which were each designed after an iconic set designed in the ’70s for Sonny & Cher. Step and Repeat LA also provided a chroma-key green screen backdrop and matching floor print, as well as a life-sized standee of a green screen bodysuit Hall had previously worn as a joke when she performed on the show!

The official ribbon-cutting ceremony for DragCon LA 2022 will take place on Friday May 13th, and the star-studded convention will razzle and dazzle with royalty and sass clear through the eve of Sunday, May 15th.

About Step and Repeat LA
Independently owned and operated just outside of Burbank, Step and Repeat LA is a one-stop-shop red carpet event company that has been providing Media Walls, backdrops and everything VIP for some of the biggest events in Los Angeles. Services include top-notch sales executives to handle every detail, a cutting-edge design team that creates custom-designed layouts, as well as in-house printing, production, and quality checknot to mention a 24 hour turnaround capability!

Industrial Burner Market is Projected to Reach $7.9 Billion in 2027

Recreation Club Market is expected to grow at a CAGR of 6.8 percent during the forecast period.

CO2 Gas Sensor Market is expected to grow at a CAGR of 9.2 percent during the forecast period.

UV Tape Market is expected to grow at a CAGR of 7.4 percent during the forecast period

Bioink Market is expected to grow at a CAGR of 20.48 percent during the forecast period

Bio-based Polyurethane Foam Market is expected to grow at a CAGR of 5.9 percent during the forecast period.

Methyl Palmitate Market is expected to grow at a CAGR of 5.2 percent during the forecast period