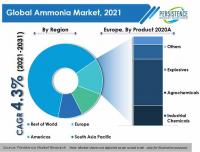 To remain ahead of your competitors, request for a sample @ https://www.persistencemarketresearch.com/samples/18724

As per analysis by Persistence Market Research, the global ammonia market is estimated to expand at a healthy CAGR of more than 4% over the forecast period of 2021-2031.

Growing consumption of nitrogenous fertilizers is expected to drive demand for agrochemicals over the coming years.
Robust growth of mining operations in Asia Pacific, especially in countries such as Indonesia and China, has led to significant growth in demand for ammonium nitrate-based explosives, thus stimulating demand for ammonia.
Increasing use of ammonia in the manufacturing of various fertilizers such as urea, MAP (mono-ammonium phosphate), DAP (di-ammonium phosphate), and various other agrochemicals is driving the market in terms of consumption in Europe.

Demand for ammonia for the production of modified fertilizers is expected to boost market growth over the coming years.
Owing to increasing demand from end-use industries, key ammonia manufacturers are focusing more on greenfield projects to meet global demand. However, a few key players are planning to increase the production capacity of their existing plants to meet regional demand.

Key players have signed research & development contracts with academic institutions to introduce new applications for ammonia and develop new technologies that can help reduce overall operating and production costs. With a demand share of more than 50%, the agrochemical sector is projected to remain as the backbone of the ammonia industry throughout the decade, says an analyst of Persistence Market Research.

Get a Customized Scope to Match Your Need Ask an Expert- sales@persistencemarketresearch.com

Mealworms Market Worth $1.27 Billion by 2030 Exclusive Report by Meticulous Research®